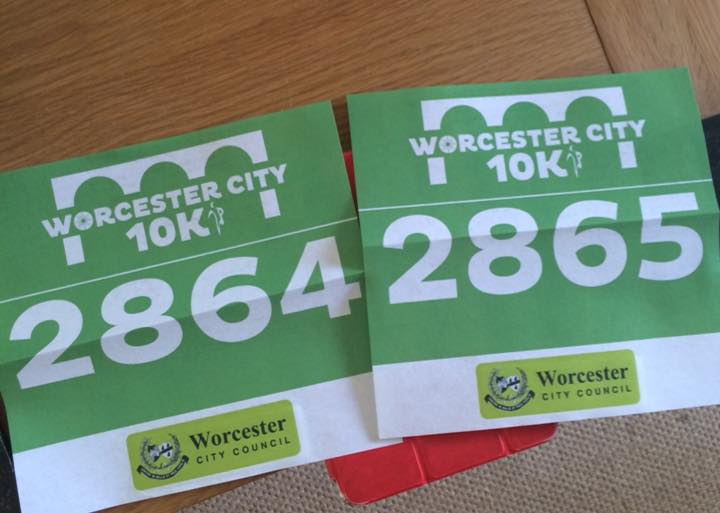 On a foggy morning in late September 2015, after a year of running by myself, I ran at my first race event. While this may not sound like much, just to give some context, a year ago I was about 6 stone heavier and liable to run out of breath whilst climbing a moderately sized flight of stairs. The fact that I was out running a 10k in the streets of Worcester was as much of a surprise for me as it was everyone else!

10 kilometres sounds like a daunting distance at first. I’ve mostly been running 5k during the last 12 months. I started with the NHS Couch to 5K programme, using the treadmill at the gym. It was only after watching Chris and some of the other Swifts at the Berlin Half Marathon in Berlin in March that I started to run outside and from there I wanted to start to run that bit further. In the run up to Worcester I started pushing some of my routine runs beyond my usual 5k. I was trying to find a running pace that worked for me and allowed me to cope with the longer distances without tiring myself out too early. The advice that Chris gave me, which proved invaluable, was that I shouldn’t try to run the 10k at the same pace I’ve been running the 5k at as I would be likely to tire out very early on and wouldn’t make the finish line.

So my philosophy for my first race was simply to do my best and finish the course and most of all enjoy it. I wasn’t focussed on getting the fastest time or trying to overtake any of the other Swifts out there running, I was there for myself and crossing the finish line and getting my first medal (and event t-shirt) was reward enough.

The race itself was an enjoyable one. Worcester was a lovely city to run round. Once the early morning for lifted we had a beautiful day. Not too warm and not too cold. When running round Worcester, Chris and I ran together. It was good to run with someone as we worked to encourage each other and keep ourselves motivated. We also kept passing pubs and restaurants that we might want to sample in the future!

It was also great and very encouraging, seeing so much support out on the streets. There were so many people out cheering us on, shouting encouragement. Although the shouts of ‘you’re nearly there’ at the 2k line still make me chuckle!

The Swifts are a great group to run with. There was a lot of encouragement for me as a first timer and I am delighted to have my first medal. 10 kilometres is still a long way to run and no doubt I’ll find the next one a bit daunting in the lead up to it. But I know I can do it now.

Actually, as a matter of fact, I’m rather looking forward to it.