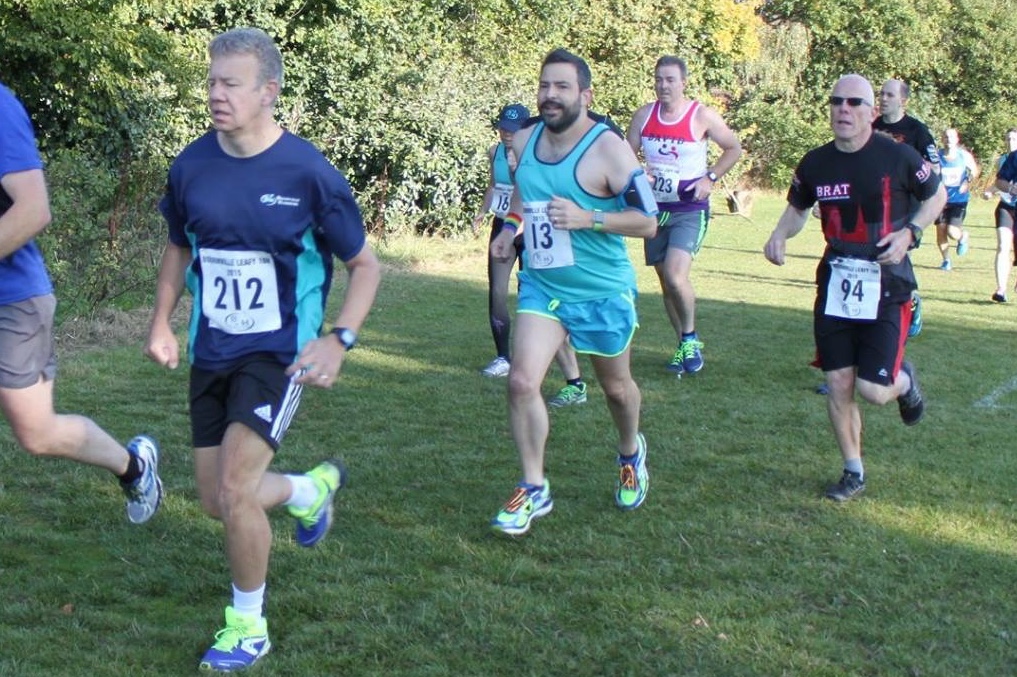 Autumn is upon us! Trees shedding their loads everywhere! So, the aptly named Bournville Leafy 10k was a great addition to the Birmingham Swifts race calendar this year!

Only two weeks prior to the Great Birmingham Half Marathon, this course is great for pushing the race pace, taking in the potential weather and stumbling up some dastardly hills in preparedness for the impending longer run.

Six Swifts took on the challenge: Ali, Darren, Cheryl, Blaine, Aaron & Paul, with additional challengers in the form of a Birmingham Bull and a (for one race only) defecting Swift, racing under Bournville Harriers colours! That’d be me!

The Blue and Orange livery was well noted however by those assembling as the Swifts make an ever increasing impact on the Birmingham Running scene and with the appearance of Blue & Orange topped rainbow cupcakes on the charity stall, crafted by Aaron, we added colours to the baked offerings too! Fran attended to fly the flag and cheer us on completing our attendance!

The race itself took in a lap of Rowheath, opposite the Pavilion where the Harriers meet and then headed through the streets and woodlands, hills and parks of Bournville. A two lap course which challenges participants with leafy and unpredictable under foot pathways, walkways, grassland and of course inclines!

The notorious Hole Lane, a long climb up from the (far from level) Bristol road was a favourite of some Swifts last year but the end of first lap / final climb up to Rowheath is a particularly devilish slope that forms part of the final sprint. Being pursued by Richard, our friendly Bull, I had to take this at full pelt but managed to avoid vomiting as I crossed the finish line seconds ahead of this rival… Unlike one Swift last year who gave everything including his breakfast to the final straight!

Loud cheering as always as the cacophony of Swifts grows with each finisher and all Swifts in, under an hour, was a mighty achievement. Even with potential time adjustments for what turned out to be a “short” 10k (5.8miles we mostly recorded) course, this still held as one of the fastest Swifts 10k’s to date! Improvements all round!

With a fabulous wooden leaf shaped medal around each neck, the post-race breakfast cooked by Darren (Sioux Chef Ali) went down a treat and as the weather held, sitting out in the sun and enjoying the post-race banter was an additional pleasure for our running group!

Bring on Birmingham Half we all say!